What Ever Happened to Google PageRank?

What Ever Happened to Google PageRank? 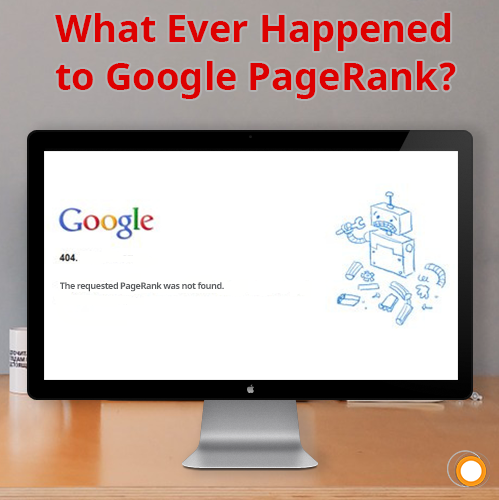 When was the last time you heard anyone mention the term PageRank?

It's the benchmark of a successful website.
Or at least, it used to be.

Now it seems to be that 'thing' we all used to talk about, but shouldn't mention any more.


A Brief History of PageRank

PageRank was one of the first algorithms used by Google to measure the importance of a web page.

The logic was that web authors will link to useful or popular web pages more often than to less useful pages. Particularly those best suited to support the content they were writing about.

So PageRank counted the number and quality of links pointing to web page, and gave the page a ranking out of 10.

Each link was like a vote. The more links/votes a page has, the higher its PageRank (more or less).

This was then joined with the frequency of keywords on a page. So a web page could have different a PageRank for different keywords.

From this, web masters and other types soon found a way to take advantage of the simplicity of PageRank.

Achieving a high PageRank for a particular keyword became a lucrative and competitive business.

And then one day, it all just seemed to stop working.

New websites would get stuck on a PageRank of 0. For older websites, their PageRank seemed to be unresponsive. SEO efforts appeared to be ineffective in improving the PageRank.

As a web developer, this vexed me. I was terribly vexed (Gladiator reference). Why are the websites I build deemed worthless in the eyes of Google?

So like we all do when we want to know something, I Google'd it.

It turns out that we had all thinking about PageRank the wrong way, and Google responded to change this.

As far back as 2009, Google stated that site owners were focusing on PageRank too much. We were giving it more value than it actually had; and so Google were going to phase it out.

In October of 2009, Google removed PageRank measurements from their Webmaster Tools.

Other websites that allowed people to find their PageRank still existed though. So many failed to notice what Google were doing.

Then, in November 2014, Google stopped updating their visible PageRank feed. This was the source that the other online tools were using.

Google followed up a year later by announcing that there would not be any more updates to the PageRank feed.

You'll remember that this is about the time that the SEO community began to shift their focus to content.

And Google started to release new algorithms, and update their older algorithms.

The SEO community scrambled, trying to determine the new way to improve SEO. Searching for any sneaky advantage that they could.

Then Google started recommending everyone shift their focus towards creating 'quality content'.

And now we're back into the present.


So is PageRank dead or does it still matter in SEO?

PageRank is still 'a thing'. It's just had it's badge of honour removed.

PageRank will always be an important factor to determine the best results for a search query.

But webmasters shouldn't focus on PageRank as a definitive measure of success.

While keywords and links are still an important part of SEO, they are now a minor part of a larger set of metrics.

In fact, Search Engine Optimisation is such a large topic now, that it's better for me to point you to the masters.

Our first port of call is always the Google Webmasters website. This site explains the fundamentals of how search works. It also guide you to help Google find, index and rank your site.

If you're a beginner in SEO, I recommend heading to the Moz website next. Their SEO guides are easy to follow, and their free Moz tools are great to find where you should start first.

Then check out Majestic SEO for more tools to give you an in-depth view of your website.

Of course, you can keep following our Blog for the big updates in the SEO. And check our social media feeds for useful SEO tips and advice.

So if you're still using the PageRank of your website as a measurement of success, it's time to catch up.

You should now be talking in Conversation rates, Bounce rates and clickthrough rates.

Agree? Disagree? Start a conversation on the iASP Central Facebook Page or Get in Touch.