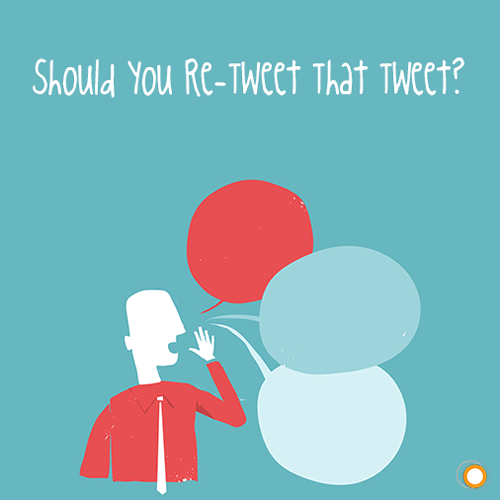 Not everyone is using social media at the same time however.

Some people use it throughout the day, others just a couple of days a week.

So how can a business ensure that their clients and followers see the information that is shared by the company on social media?

Is it acceptable to post the same information a number of times, or should the business focus on encouraging their followers to be following at the time the company shares their information?

At some point in time, a choice will need to be made - Should You Re-tweet That Tweet?

If we compare social media practices to real world social interaction practices, re-tweeting something you have already said could be compared to sharing a story with one friend about your children winning first place at the sports festival, then walking over to another friend and sharing the exact same story, and then moving onto another friend...

I've been to many a gathering and have seen people repeating their stories, and the crowd seem to clue on pretty quickly about what is going on.

People see this as overemphasising the story, trying to give it more importance than it may actually have, and they react negatively to it.

It doesn't matter if the story is a great tale worthy of being set in stone, more often than not the more times people see or hear it, the less they like it.

It's tempting to categorise re-tweeting a tweet (or re-posting a post) the same as "that guy with only one story", however, that's not the reality.

Unlike a real world social gathering, where everyone is present and with at least some awareness of things going on around them, social media followers are not always present and can be very easily distracted when they are on-line.

Despite the fact that around 10 million Australians are on Facebook every day^, few, if any, are actively there 24 hours a day, and with only a fraction of the followers in your network receiving each individual content item you publish the chances of a social media post being missed is extremely high.

This is why re-posting your social media content is an actually an acceptable thing to do.

Compare the practice to that of a TV or Radio station, who regularly repeat the top stories of the day.

It isn't because they don't have any new stories to cover, it is because not everyone tunes into the 7am broadcast.

If the information you are sharing is valuable enough, people will accept the repetition rather than reject it.

It is very easy to cross the line however, and come out looking like you're desperately trying for everyone in the entire world to know you have a new blog article on your website.

There are best practices and bad practices that you should consider when re-posting your content on social media.


You don't need to re-share every type of content.

The more valuable the content is, the more acceptable it is to re-post it.

While it might seem like a good idea to re-post a photo that received a lot of likes, re-posting the same photo won't be received the same way the second time around.

Re-posting other content, especially those with the same image can look like you're platform is just stuck on repeat.


Change Up the Message

When re-posting or re-tweeting, don't re-post the exact same post / tweet - and be certain to change the image.

For example, if your typical link post looks like [Article Title] [Link] [Hastag], then try a completely different format when you re-post the link.

The more you change the format, the less your page will look like it is being managed by an automated script.


Get the Scheduling Right

When it comes to timing your re-posts, each social media platform has it's own requirements.

Twitter is very busy. A tweet can get lost among the clutter very quickly. And for this reason, you will want to re-post more frequently than the other platforms.

Again, remember to change the content of the message so your feed doesn't look like you're just hitting 'repeat' every few hours.

Facebook and Google+ are much more forgiving. The lifespan of content is longer, and it is easier for people to follow up on what you've posted in the past week/month if they are interested.

It's safe to re-post on Facebook and Google+ a week after your initial post, following up again a month later.

When it comes to getting the balance right with your audience however, it is very much trial and error.

Consider what you deem to be enough, and not too much.

Try one schedule, and measure the results. If your followers mention something, or start to leave en-mass, then you know your current schedule is too much and you need to cut it back.


So there we have it.

Done appropriately, and with some attention to detail, re-posting your link posts is an effective way to ensure that your content has a longer lifespan, remains useful and accessible by your followers, and has the potential to reach a much wider audience than just posting it once and hoping for the best.

^Source: These incredible stats show exactly how huge Facebook is in Australia.

Do you repost your content? What are you thoughts on the practice? Start a conversation on the iASP Central Facebook Page or Get in Touch.