Net Neutrality & Why You Should Care

Net Neutrality & Why You Should Care 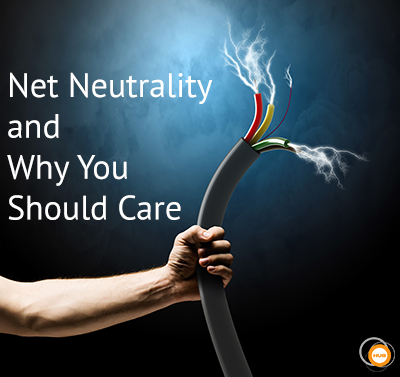 Here at HCD we aim to keep our clients well informed on all subjects that relate to the digital space. The Net Neutrality debate may not be the sexiest topic on our radar, but as it has the potential to change the way we use the Internet, we thought it was worth passing on the following information...

The Net Neutrality debate in the United States is one of those topics that could be nothing, but it could, potentially, be cause for serious concern. In all cases, such as this debate, it is better to be well informed and well prepared so that you can take any necessary steps to minimise any potential for damage before it occurs.

The topic of Net Neutrality is far from new; for the better part of a decade, many parts of the world have been discussing and debating the case for a neutral and open Internet. The debate has become particularly heated in the United States, however, with large corporations supporting both sides and the subject sparking numerous protests and petitions.

Major political decisions in the United States always seem to echo an effect globally, so will the outcome of their decision change the Internet as we know it today?

What is Net Neutrality?

In a nut-shell, this is the argument for an "open Internet" or for a "closed Internet".   An "open Internet" being one where people can use the Internet equally without any interference from third-parties (no slowing of Internet speeds, no blocking of Internet services or websites). A "closed Internet" being the opposite, where the content or Internet services a person can access is restricted and managed by the service provider they use to connect to the Internet.

One can imagine the limitations of having a "closed Internet" - for example, not being able to access YouTube, because your Internet Service Provider has their own equivalent website, or is partnered with a different website.

What are the current arguments for Net Neutrality in the US?

In one corner, there are many Internet content and application providers such as Google, Facebook, Amazon and Microsoft, along with groups such as Free Press, the Consumer Federation of America, the American Library Association, Gun Owners of America who are all in support for Net Neutrality. Just recently, the Major League Baseball (who are the largest distributor of live video on broadband networks in the US) also joined the supporting side.

What are the current arguments against Net Neutrality in the US?

In the opposite corner, groups like Americans for Prosperity, the National Black Chamber of Commerce, the Competitive Enterprise Institute as well as all of the major Telecommunication and Internet Service Providers such as Comcast and AT&T are strongly opposed to Net Neutrality; and are even accused of attempting to essentially buy support and votes to help their cause.

The opposition stance is that Net Neutrality limits the usefulness of the Internet, and will discourage investment in the development of new infrastructure, which would result in limiting the overall bandwidth available for Internet data. The opposition also counter arguments from supporters of Net Neutrality by stating that the Internet is not classified as a utility, and so should not be regulated as such; and that by giving bandwidth preference to popular content is actually in the best interests of the consumer because that is what the majority want to access.

Will the outcome affect Internet in Australia?

The short answer is yes, as much as it will affect the Internet globally, though the effects may be more obvious for Australians as many of the communications cables linking Australia to the rest of the world link to the US. A significant chunk of global Internet traffic flows to and from the United States, and limiting the flow of traffic will have knock-on affects.

What about the Net Neutrality Argument in Australia?

We have already finished our debate about Net Neutrality, and it has been seen as a lost battle. The Australian Competition and Consumer Commission already regulates Internet Service Providers, and prevents network traffic management that would be considered as being anti-competitive behaviour. Australian Internet Service Providers could be considered to be discriminating, however, in providing un-metered data however, which provides access to websites or services that does not count to the users data allowance, and could possibly result in users preferring the free service over a competitors. In this sense, Australian Internet is not truly Net Neutral, but un-metered content is seen as a benefit to consumers that have limited data allowance plans as opposed to the unlimited data allowances that all US consumers have.

HCD Tip: Keep an eye on this debate, as it may very well change the way everyone uses and thinks about the Internet.

What is your opinion? Do you agree or disagree with the idea of a Net Neutrality? How do you think the Net Neutrality discussion in the United States will affect Australia? Share your thoughts on the iASP Central Facebook Page, or Get in Touch.