It's the Final Curtain for Adobe Flash Player

It's the Final Curtain for Adobe Flash Player 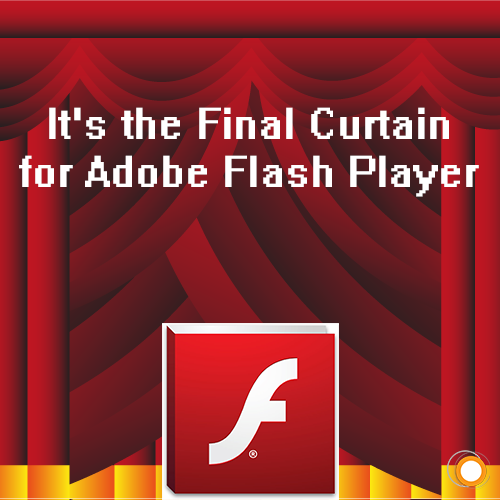 Flash content is now in the last stages of becoming a relic of Internet past after another major web browser dropped native support of the Flash Player plug-in just last month.

While it isn't the final nail-in-the-coffin for Flash Player just yet, it is the final notice for developers and advertisers that still use Flash Player to deliver their content.

None of this has come unexpectedly to marketers and developers in the industry, however.

The end for Adobe Flash Player became almost guaranteed after Apple founder Steve Jobs famously announced that Apple iOS devices would not be supporting Flash Player (and therefore, Flash content) due to the poor reliability and poor security that Adobe Flash Player was well-known for.

Without going into unnecessary detail, the demise of Flash Player comes down to the capabilities of HTML and web browsers finally catching up to those that Flash enabled decades ago - without the performance issues and security holes that also come with using Flash Player.

Now, in a very similar fashion to the infamous web browser Internet Explorer, Flash Player is set to hold a place in Internet history as an example of what was once considered to be ground-breaking technology that helped to push the Internet to where it is today.

In the early 1990's, Macromedia Flash (as it was known at the time) truly introduced the world to the new possibilities that the Internet could provide. The Internet shifted suddenly from being a static medium, with content made up of text and images only, to something that could now potentially compete with the likes of television.

A graphics and animation editor all-in-one, the simple to learn nature of the Macromedia Flash application allowed people to create animations and interactive multimedia easily, without the need to understand computer programming languages. Even entire websites were developed in Flash.

Flash movies and Flash games quickly became a popular form of content, as it was difficult to deliver content in other formats across the Internet at the time that was comparable in quality (particularly video content).

Flash also became the platform of choice for marketers and advertisers, as it allowed for the production and delivery of banner advertisements that were higher in quality than anything else available.

Still, as with all technology, Flash Player has inevitably become redundant and is being cast aside for a faster, better, stronger replacement.

It is important to note that the Adobe Flash application itself is not dead, however, and has evolved to allow developers to produce animations and multimedia applications using the newer platforms such as HTML5 Canvas and WebGL.

In memory to Flash Player and the Flash content era that came with it, we share our favourite portal website that was one of the original pioneers in all things Flash - Newgrounds.