Is the Pixel Perfect? We ponder the new Pixel by Google

Is the Pixel Perfect? We ponder the new Pixel by Google 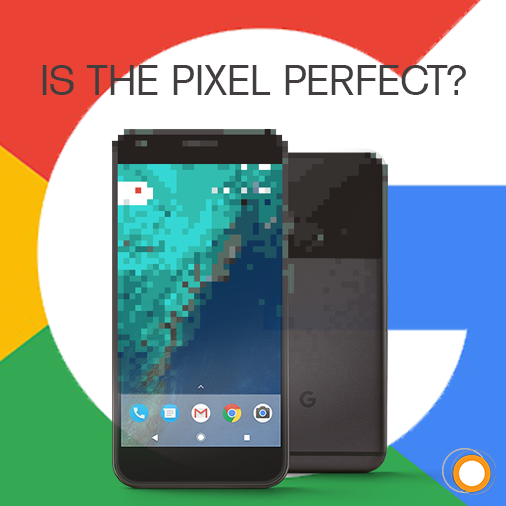 Did you know Google launched a new smartphone device last week?
It was a surprise on the day, but now you can't miss it.

The new Pixel Phone by Google has arrived and it means business.

Set to replace their Nexus range of products, Pixel is "the first phone built by Google inside and out".

Regular readers will know that we at iASP Central are difficult to please.
We aren't the types to jump ship to the latest gear, only to the greatest gear.

So let's find out if the Google Pixel will stick, or if it looks to be a dead Pixel.

Just like the Apple iPhone, the Google Pixel is available in two sizes - The Pixel and the Pixel XL - with the Pixel XL being the iPhone Plus equivalent.

And on paper, the new Google Pixel defeats the Apple iPhone 7 hands down.

Just the presence of a headphone jack will be enough for some to consider the argument over, but there are more important things to consider.

When you compare the two side by side, the Google Pixel is always slightly better than the Apple iPhone. Not surprising really.

This means the biggest differentiator will be between the operating systems and their ease-of-use.

As you know, Apple's iOS has won the global market in terms of usability.
The simplicity in learning how to use an iPhone for the first time is the root of the iPhone's success.

And while the Android OS has been available on several different devices (most notably the Samsung Galaxy), Android devices still haven't reached the benchmark set by the iPhone.
Nobody is walking around saying "I want it to be as simple to use as an Android".

Google's latest phone might just change this perception however.

And as always, it's the little-big differences.

For example, the Pixel is the first phone that has Google Assistant built into it.
And when you look at it, this could be a game changer.

Google Assistant is more than just a voice activated bot that you give commands to.
Imagine Siri, but with AI learning capabilities that enable it to remember past conversations, and understand you better each time you use it.

Plus, Google Assistant can be used in everything from your smartwatch, to your smartphone, to your car, to your home. It isn't just limited to one or two devices like Siri or Cortana. So you can ask Google Assistant to turn on your TV and start playing a Youtube video, from your car as you're pulling into the driveway.

Apple doesn't appear to have anything close to this capability... yet.

As Google's chief executive said during the launch, "Our goal is build a personal Google for each and every user."

This might be a little spooky for some people, but it does seem to be the future we are heading towards.

And what might just be the final nail-in-the-coffin, is the Quick Switch Adapter that comes standard with every Pixel phone.

One long-standing excuse for iPhone users to stay with iPhone was the excruciating task of transferring "everything" from an iPhone to an Android device.

The Quick Switch Adapter allows you to transfer just about everything from any device running Android 5.0 and up, and iOS 8 and up, across to the Pixel phone.
And it doesn't involve any great depth of geek knowledge to do it.

The new Pixel Phone by Google is definitely a new challenger in the smartphone market. With features and functionality that is on-par with the Apple iPhone, the line that once clearly separated the iPhones from the Androids is becoming blurry.

If you do have an iPhone 6 or an iPhone 7, you won't find much reason to go out and get yourself a new Google Pixel today.

But if your smartphone is getting on in years, and it's time to upgrade, you might want to give the Google Pixel a test run.

The Google Pixel is very comparable to the latest Apple iPhone.
The differences between the two for the average person will come down to your personal preferences.

Smartphone users now need to start considering the other smart-devices they use, and put device compatibility at the forefront of their buying decisions.

You'll either be an Apple user, or a Microsoft user, or now perhaps, a Google user.

What do you think about Google's new phone? Let us know on the iASP Central Facebook Page, or Get in Touch.