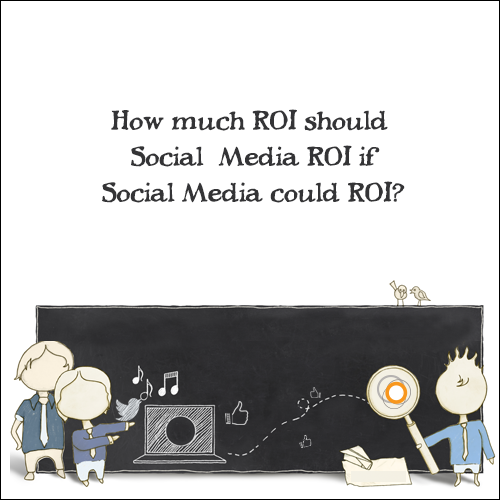 I mean sure, a couple of people chuckled and you got a few thumbs up from your friends, but are you really going to pick up stumps after a lacklustre response and go find a better group to socialise with? One that will laugh really hard at ALL your jokes?

For a small business, being on social media is like giving good customer service. You don't have to do it, but doing so creates a special connection with some of your customers who then go on to speak good things about you. A positive result that isn't achieving great returns, but it is a better result than the alternative.

Another metaphor I could use is that social media presence is like putting $5 in a savings account every week, or like planting the seed of a fruit tree in the back yard. You aren't going to get any immediate returns, instead, you're looking for future growth. And maybe 5 - 10 years down the track, after giving the tree enough nourishment to grow and the right conditions to grow in, you'll be rewarded for your efforts with plentiful fruit, just ripe for the picking. Or just as likely, you'll find that you should have checked the soil first because apple trees don't grow in clay you num-num.

Our advice has always been to get on social media, in the very least, on the major platforms. Then, just maintain a presence that suits your business, and suits you. Don't feel that you need to compete with the big leagues. You don't need 10+ posts every day, posted at the optimal time to get the most views. I mean, if you compare that to real-world social dynamics, someone who feels the need to say something every few minutes is regarded as an attention seeker, and in most social circles that is a turn-off.

Co-ordinate your social media presence with your real-world social presence. Post as often as you would go out (I don't mean post at the same time that you go out, just as often).

So throw away the short-term social media ROI targets. Invest as much time as you can or want to into your social media socialising. Make it natural, don't force it. The social media community will treat you the same way you treat them.

And who knows, 5 - 10 years down the track, the compound interest on your regular $5 deposits might hit the roof, and you find a pot of gold waiting for you at the end of the social media rainbow.

*Author's Note: Allow me to clarify further. This article has been written for small business readers in mind, who have social media goals along the lines of establishing and growing an on-line community. Their social media Return on Investment is measured in terms of audience engagement and audience size.

You will need to determine how views and likes and favourites and retweets compare to broadcasts and impressions and reach. You will then need to create models that estimate how many likes and retweets converted into direct sales, and compare it against how many television advert views converted into direct sales. All this so you can then decide how much the $$ you put into social media compared to the $$$$$$$$ you put into advertising on traditional media channels.

Or you could just justify it like a company justifies spending $$ on t-shirts, hats, mugs and keyrings to hand out at a conference. You'll create a bit of brand awareness from the few people walking around with your logo on their head or in their hands; and you might get two people actually call you for work. Unless you were the life of the party, in which case you may get 10 people call you and slightly more brand recognition.

If you really must know how valuable your social media efforts are in terms of creating leads or sales, then journey onto our next article: How Much Is That Like There In The Window?

Investing in social media is like investing in a lottery ticket. It may pay off, and it may not. You can buy several tickets in all of the games every week and still have average returns, and every now again you might get a big win. It's true, you've gotta be in it to win it, just don't go blowing your budget expecting to win big.

What Return on Investment do you set for social media? Are you reaching it? Let's discuss on our iASP Central Facebook Page, or Get in Touch.