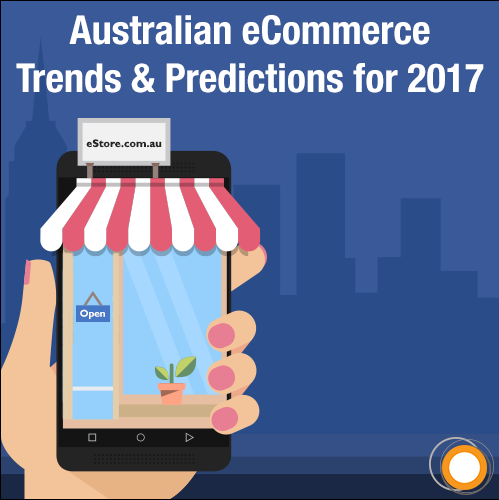 2016 was an odd year for eCommerce in Australia.

The shopping year started off slow, and many retailers were predicting a lack lustre year for themselves.

Yet, the NAB Online Retail Sales Index has estimated that Australians spent more than $21 Billion online between November of 2015 and November of 2016.
If you recall, Australian online shoppers spent $17.6 Billion in 2015.

The statistics support both sides of the story though, showing that Australian consumers did ease off their spending habits for the most part of the year, but (seriously) made up for it in November and December.

The good news is the outlook for 2017 is for another year of positive growth for eCommerce in Australia, with the predicted trends suggesting that this will be a year for significant changes in the industry.

Mobile eCommerce will continue to grow as it has been.

But the prediction for this year is that the focus will be on improving two keys areas: SEO and Payment Methods.

Last year, Google announced that it will be splitting their current search index into two, one index for mobile search and another index for desktop search, with the mobile index becoming the primary search index.

In response to this, we should see eCommerce websites focus on improving their efforts in local SEO, as well as improvements to take advantage of the shift to Voice Search.

If you haven't heard the term Voice Search before, we suggest you read up on it. We've included a link in the list of resources at the end of this article.

New payment methods that aren't as cumbersome as entering Credit Card details every transaction are also predicted to trend this year in Australia.

Last year contained a lot of buzz about mobile wallets and mobile payments, but stalled once Apple and The Big 4 banks started to battle for control of the Australian market.

This caused a very slow uptake of mobile payment technologies by consumers in Australia, and online stores were happy to continue with the options they were providing.

Now that the dust has settled, online retailers should start to incorporate mobile payments into their eStores as they start to see more demand from their customers.

Chat Bots are predicted to be the next big thing in 2017.

Down here in Australia though, we don't predict that Chat Bots will take off as much as in larger markets, such as the United States or Europe.

The ultimate decider in whether Chat Bots become a useful tool for eStores will be the Australian customer.

If Australian shoppers don't find a Chat Bot to be both a convenience and a delight to their shopping experience, they will ditch them faster than an out-sourced call centre.

Unless they're done very well, Chat Bots may end up in the same vein as Chat Support plug-ins that were touted as the next big thing in Customer Service.

To the Australian customer, Chat Support has turned out to be more of a gimmick than true customer service and resulted in the technology (and the companies that use them) being viewed negatively.

Of course, the big shake-up predicted for eCommerce in Australia this year will be the entry of Amazon Australia into the market.

Amazon announced last year that they were coming to Australia.

At the time of writing, Amazon had not yet officially launched their Australian arm, but no doubt every sharp business owner that sells products will be keeping a tight eye on them.

No one knows how the Australian market will change once Amazon officially open, but predictions are that it will hurt, and hurt badly.

Competition is good for the consumer though, so it will be interesting to see how Australian eStores respond to counter the hit to their business.


Do you own an eCommerce website? What do you think will be key for eCommerce in 2017? Start a conversation on the iASP Central Facebook Page or Get in Touch.