The Shocking Truth: Are Tablets a "Mobile Device"?

The Shocking Truth: Are Tablets a "Mobile Device"? 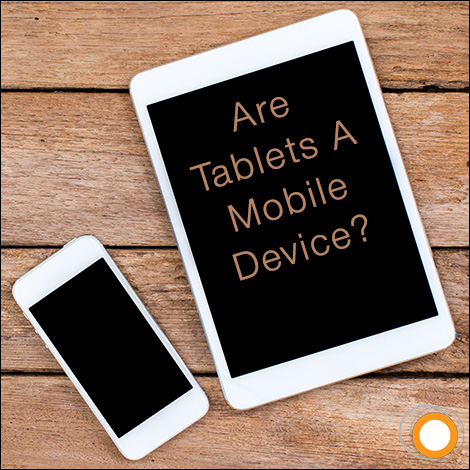 There are now so many gadgets that allow us to browse the Internet - not only personal computers, laptops and notebooks; but also tablets, phablets, smart-phones, e-Readers, Personal Digital Assistants (PDA's), gaming consoles, hand-held gaming devices, televisions, even fridges - but which of these devices fall under the category of a mobile device?

Wikipedia defines a mobile device as "a small computing device, typically small enough to be hand-held... having a display screen with touch input and/or miniature keyboard and weighing less than 1kg".

W3Schools, a trusted industry reference, simplifies the definition even further, stating: "A mobile device is a pocket-sized computing device."

Therefore we can agree that to be classified as "mobile" device, the device must be small and light. This clearly rules out personal computers, gaming consoles, televisions and fridges.

And it seems that being "portable" is not the same as being "mobile". Laptop / notebook computers are certainly portable, but not small enough to be pocket-sized, or light enough to fall into the mobile device category.

We can also conclude, that to be a true mobile device, it must be hand-held with a touch-screen (to use fingers or a tool such as a stylus) or mini-keyboard so the device can be used effectively while moving about.

But what about tablets and phablets?.

On the one hand, tablets/phablets are small and light enough to be hand-held, they have a display screen with touch input, and a miniature keyboard.

On the other hand, they are used very differently to a smart-phone or an e-Reader.

A tablet isn't convenient to use while on the go (as anyone who has tried would attest). A tablet is just a smaller, compact version of a laptop computer. So from an industry point of view, tablets in fact fall into the desktop category.

Phablets on the other hand - well they're just inconveniently big smart-phones. Too small to be useful as a laptop computer, and some would say too big to be useful as a phone. But, because of the way that they are used - on the go - these technological anomalies fall into the mobile category.

This is an important distinction, because it now changes the way we should think about "mobile" device, and also the way we think about the term "mobile-friendly".

"Mobile-friendly" isn't just making a website display well on a mobile-device, it's about making the end-goal of the mobile user far simpler on a mobile device, taking into account the facts that mobile users are mobile - moving about, time-poor, often with distractions about and lacking the same tools that desktop devices available to use.

The iASP™ platform has been publishing simultaneously desktop "mobile" device friendly websites since 2006 and the majority of our clients will benefit from Google's changes as their non-mobile-friendly competition pay the price for their lack of foresight.

The good news is it's not too late to invest in a mobile friendly website so if you would like to know more please contact us for a confidential discussion.

Thinking of making your website more mobile-friendly? What do you think it involves? Let us know on the iASP Central Facebook Page, or Get in Touch.